One of the most famous volleyball coaches and a true volleyball legend is Mr. Bernardo Rocha de Rezende from Brazil. Rezende, nicknamed Bernardinho has become a coaching legend when coaching nearly unbeatable Brazilian men's volleyball team in 2000's. He has been the coach of great national team of Brazil since 2001.

Rezende is born in Rio de Janeiro on May 28th, 1959. Bernardinho has been married to a volleyball player, Fernanda Venturini since 1999. Bernardo and Fernanda have a daughter, Julia. Before he was married to a former volleyball player Vera Mossa, with whom he has a son Bruno Mossa Rezende, the Bruninho, who is the setter of the Brazilian men's national team.

Rezende is inspired by the"Pyramid of Success", established by famous US basketball coach John Wooden. Like his mentor Rezende created the"Wheel of Excellence", a step-by-step process to success.

In his system Bernardinho teaches values such as teamwork, innovation, leadership, motivation, perseverance and other concepts common to personal development and human resources.

"I don't know exactly but I hope seven or eight years. Our team was born long time ago and we have to replace many important players like Nalbert or Giovane. We built a strong team sharing the same values, manners and starting every time from scratch." --Bernardo Rezende when asked how long can winning streak of his great team last 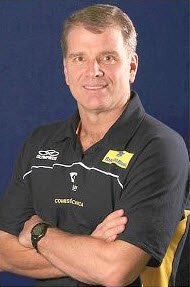 "The real meaning to life is not the cup, but the coffee you drink." --Bernardo Rezende

"I am sad because we are losing some members of our family." Rezende referring to some players, who might be retiring from the winning national team.
"They still have the will to share. It is sincere, and that is what gives me emotion."

"I think that I have failed as group leader because of the lost of Ricardo. I still would have liked very much working with him but it wasn't possible. Eight years ago, when nobody was trusting in him, I betted on Ricardo and now I feel this as a personal defeat." -- Bernardo Rezende shows character and takes responsibility when the team lost their captain due to a big argument."