The history of volleyball began in the mind of a man named William G. Morgan. The original name for the sport was "Mintonette" but changed to "Volleyball" very early on.

Like the name the rules of the game have transformed and developed over the years.

However, the spirit that volleyball was created in has been carried on through over a century.


The History of Volleyball - Where, When, Why?

Volleyball was invented in Massachusetts in 1895.

It remained solely an American sport for a few years until it began crossing oceans to become one of the most exciting and popular sports played world wide.

Volleyball had humble beginnings, created by a teacher to be a uniqueand challenging game for his students. Now it is an Olympic sport played and watched by millions of people inspiring fitness, skill and teamwork.

The Ball and the Net in the History of Volleyball

The tools of volleyball were taken into careful consideration. 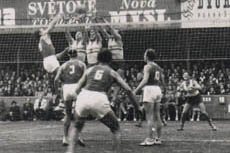 Morgan liked the idea of a net, like the one used in tennis, but rose it to 6 feet 6 inches above the floor.

Then there was the matter of the ball.  The game required something larger than a tennis ball but lighter than a basketball.

Created especially for this game was a light leather covered ball that could easily be buoyed above the net.  It was a spectacular fit for the object of the game, which was to keep the ball in movement back and forth between teams.

Rules were made, the name was changed and a wonderful new sport was born.

The game of volleyball has experienced a wide variety of rules changes throughout the early years.  Also various parts of the world have been using different rules before the standardization. 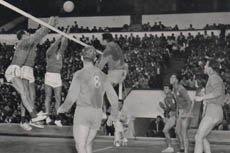 Ball:
One of the big milestones on the rules timeline is the introduction of a specifically for volleyball designed ball in 1900.

Number of Players:
In 1912 the amount of players in a team was set at six, which is the same as today.  Also the rotation before serve was introduced.

1915 the number of players in a team varies between 2 to 6. Official game time was introduced.

To Europe by American Soldiers:
In 1915 volleyball arrives to France and French beaches with American soldiers who were fighting in the First World War. The popularity of volleyball grows rapidly. Volleyball expands especially to the Eastern Europe, where the indoor games are popular due to cold climate.

Scoring:
In 1916 the scoring changed to a form which reminds of today’s scoring system. The scoring changed from 21 to 15 points and the sets were introduced.  The winner was determined with the best of two of three, which means two games are needed to win the match.

Playing with the Foot:
In 1916 the consecutive contacts per player were limited to one.

A player commits a foul if he holds on to the ball.

Also the ball was allowed to be played with feet (, which is interesting because FIVB allowed it again in the recent rules changes in 1995.) 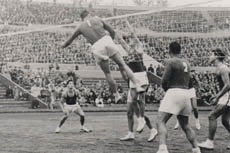 Volleyball becomes a part of NCAA, the governal body which manages college athletics in USA.

Spiking:
In 1920 the set and spike “the Filippino Bomb”, which made the game more dynamic, were established in the Philippines.  One major rule change was the allowing the team to play maximum of three contacts before sending the ball over. The first attempts of block occurred even if the block was not identified by the rules yet.

Recreational Sport:
Until the early 1930 the game of volleyball was more a recreational sport with only few international competitions on it. Despite the fact the rules of volleyball were different all over the world, the sport started to become a more and more competitive as its nature.

When volleyball was created it was not intended for the game to be confined to just the indoors.  This sport was made to be played beneath the open sky as well.

Beach Volleyball:
There are reports of men playing volleyball on the beach in Hawaii as early as 1915.

But the history of beach volleyball really began and gained momentum in Santa Monica, CA in the 1920's.  It was then and there that the first volleyball courts were put up on the beach and families came to play.

Around the World by American Soldiers :
As with the indoor volleyball, American soldiers were the ones who took the Beach Volleyball around the world. 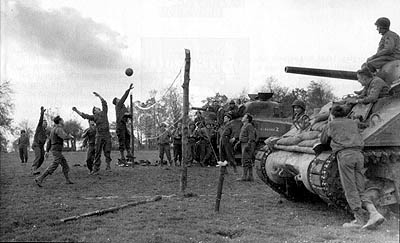 During World War II many naval bases had beach volleyball courts and the game was spread around the world.

In 1965 the CBVA, California Beach Volleyball Association was founded.

Beach Volleyball in Olympic Games:
Those recreational and more competitive tournaments on California sands set up the stage for this dynamic sport, which later on through wider international expansion gained the Olympic status in 1996 Atlanta Olympic Games. 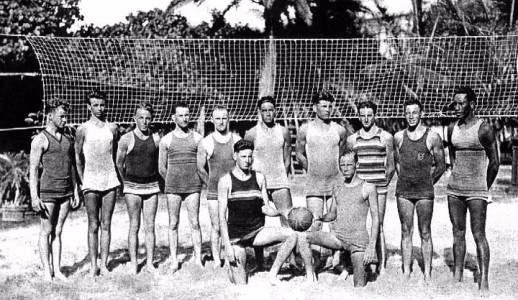 Conclusion for History of Volleyball

Throughout the years volleyball has been played both indoors and outdoors - recreationally and competitively. It is a dynamic game with a rich history that includes interesting stories about rules changes and the growth all over the world.

To read more details about history of volleyball or beach volleyball, check the related pages section.

Related Pages for the History of Volleyball

When Was Volleyball Invented
The early years of volleyball 1895-1930. When was volleyball invented? Where? How?

Volleyball History and Rules From Recreation into a Competitive Sport
In the early years volleyball was recreation, in this era 1930-50 it is becoming more competitive. History of volleyball rules changes.

Beach Volleyball History
Read about important milesstones in the history of beach volleyball.

History of Volleyball to www.VolleyballAdvisors.com