Read about the best and most fun volleyball tournaments around the world.


Top 7 Volleyball Tournaments You Must Attend

As exciting as it is to see volleyball earn its rightful place in the Olympics and on television, it’s even more exhilarating to watch a tournament unfold in person. While it might not be possible to score tickets to the big world events, there are plenty of opportunities to view the sport live thanks to a rather jam packed schedule of play each year.

Some of the hottest tournaments on the beaches, courts and even mud pits for fans to see the action up close and personal include:

This 6-on-6 tournament is held annually on Manhattan Beach, California during the International Surf Festival. Now named in honor of beach volleyball’s “Godfather,” Charlie Saikley, the event takes place each year in late July and early August. The tournament itself is a big draw for fans that turn out in droves to take in the action. The tournament includes divisions for both men and women and is set in the middle of one of Manhattan Beach’s biggest events, which also includes lifeguard races, swim competitions, sand castle design events and more.

Also known as the Estero Beach Volleyball Tournament, this massive event takes place each June in Baja, Mexico. With more than a thousand professional and amateur players lined up for this event annually, the tournament is considered the largest beach volleyball event in the world.  Players come from all over the world to compete in this tourney, which includes both men’s and women’s divisions.

In existence for well over a decade, this unusual tournament puts co-ed teams of 12 in the mud, rather than sand, for an event that’s not only a blast to watch, but also philanthropic. The Albuquerque, New Mexico, tournament benefits the Carrie Tingley Hospital Foundation and draws massive crowds each June. Although a little “dirtier” than other tournaments, this event offers some major fun for spectators. 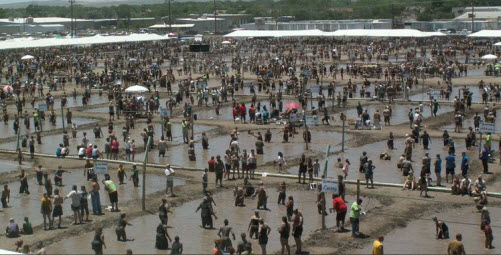 This indoor event in Phoenix Arizona is held either in the last week of June or first week of July for female athletes between 12-18 years old. The event is open and attracts teams from all over the States and also internationally. Drawing more than 10,000 people each year for the event, the Volleyball Festival is considered the single biggest volleyball event in the entire world. Around 600-800 teams have attended this multi-day tournament in the recent years.

This youth volleyball event in Finland is one of the biggest in the world. The Finnish event is staged in a different city each year and draws more than 8,500 participants ages 7 to 22. Games in the Power Cup are played on 300 outdoor courts, which accommodate more than 4,500 games over the course of four days.

• The A1 Beach Volleyball

Those who think beach volleyball is limited to California’s famous destinations need to think again. Europe refuses to be left out! The A1 tournament takes place each summer in Klagenwurth, Austria, and boasts huge crowds that turn out to witness the best of the best as they battle it out for victory.

This event in Manhattan Beach, California traces its roots back to 1960 when the first Manhattan Beach Open was held. Now considered the “Wimbledon” of the beach volleyball circuit, this July event is the place pros strive to compete in. It’s considered second only to the Olympics in regard to prestige and has been the stomping grounds for the likes of Karch Kiraly.


Watching volleyball on television pales in comparison to some of the events out there that welcome spectators in droves. When it’s time to see this sport up close and personal, the annual schedule of events offers plenty of opportunities for armchair fans to witness the action live. Experience the tournaments above!