Have You Tried These Volleyball Games? Have You Heard of Sepak Takraw?

Most people are familiar with traditional volleyball games played indoors and out, but typical two-, three- and six-man events aren’t the only options out there. When something a little more unique is desired in regard to style of play, the following volleyball-like games deliver some cool alternatives. 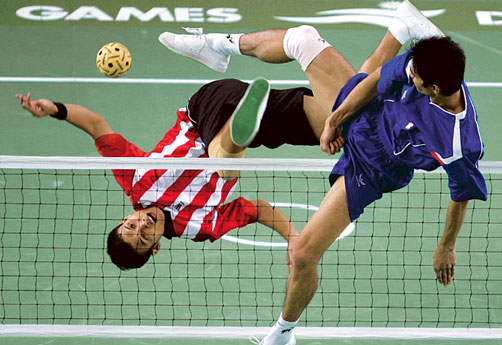 The following are some of the more unusual, but fun volleyball games:

Newcomb - "Volleyball with Alllowance to Catch the Ball"

•    Newcomb – Also known as “Nuke ‘em” this is a variation on traditional volleyball and is designed to help newcomers get used to the sport. The big difference from standard play is found in this variation’s allowance of catching the ball before passing or even lobbing over the net. Plus, serves and passes are thrown, not hit. The number of players can vary.

•    Sepak Takraw – This Asian variation has four big deviations from standard volleyball. They include outlawing the use of the hands; no rotation in defensive positions; feet must be used to get balls over the net and keep them in play; and scores can come if a ball touches the net prior to hitting the court.

Sitting Volleyball - This variation on the game was created in 1956 in the Netherlands as a way to get disabled people more active in the sport. Played on a smaller-than-a-standard court, this version requires that players have at least one side of their buttocks or torso in contact with the floor when they are hitting or attacking the ball. The game was initially created for people with amputations, polio and other limitations. It is, however, a favorite of able-bodied players, as well, because of its fast-pace and difficulty. 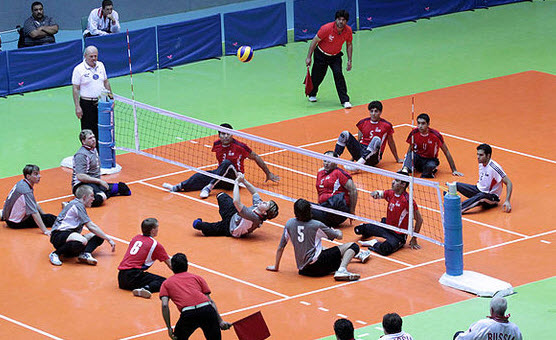 Blind Volleyball - "You can't see the opponent, since the net is covered"

Blind volleyball - In this spin on the game, the advantage taller players have is largely removed thanks to a covering over the net that makes seeing the opposing team impossible. In some cases, the game is played with a tarp stretched between the teams, rather than a net at all. The rules of the game remain largely the same, except overhand serves and spikes are outlawed.

Nine-man volleyball - Volleyball games of this type came into vogue in China during the 1920s when Americans brought the game to the country. This version calls for a larger court of 10 by 20 meters. The game’s popularity continues today. It even boasts its own tournament in the North American Chinese Invitational event held annually.

Footvolley - "A hybrid of beach volleyball and soccer" 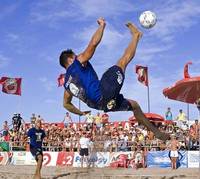 Footvolley - Blending the best of beach volleyball with soccer, this hybrid sport doesn't allow players to come into contact with the ball using their hands or arms. Any other body part, including the feet, is allowed. Footvolley got its start in Brazil, but has since spread as a popular variation around the world.

Soft volleyball - Volleyball games of this nature are meant for beginners. Rather than use a harder ball, this style of play calls for a rubber ball that can absorb some of the impact. This style calls for four players rather than six.


Try some of the volleyball games above as a warm up or fun addition to your volleyball practice. When a different style of play is desired, variations on the game can mix things up for a lot of fun. Be safe with Sepak Takraw :-)

Back to Volleyball Game Section