We introduce few ideas how to organize volleyball practice drills about offense and coverage.

This drill is one of the most exciting volleyball drill for the team since it focuses on building teamwork. 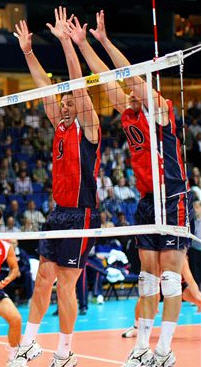 These volleyball drills are more advanced drills. Therefore we have given them a four star rating out of five. Meaning the players need to have a high skill level in order to execute drills successfully.

These drills are more difficult, but when running them you notice how excited players get about teamwork and helping each other on the court.

As we mentioned in advanced volleyball drills opening page; if the players struggle with the drills, the coach should be prepared to ease up the drill.

The coach is able to modify these drills to fit any team’s skill level very easily.

What is the purpose of these volleyball practice drills? 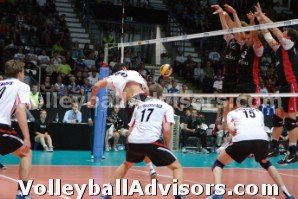 The drill may not be an exact match to the game, but it is an excellent drill to improve communication and teamwork.

As its simplicity this drill is executed by swinging the ball to the block to cover it up.

If you don’t fully understand why hitting to the block would make sense, click the fun volleyball drills link in the bottom of this page. Through the link you get more information about this commonly used strategy for the skilled hitters.


How to Run Those Volleyball Coverage Drills? 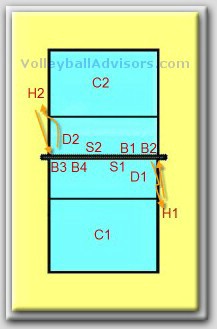 This drill could be run either on zone 4 (outside hitter, wing hitter) or zones 2 or 1 (right side hitter or 10 feet right side).

In the picture it is run on the right side (zone 2) - on the both sides of the net.

H1 and H2 are two right side hitters who keep on approaching and hitting to the block one after another. The hitter will be busy!!

Remember to switch the hitter often. The offensive player gets exhausted due to fast tempo.
It will be a little bit easier for the hitter when running this drill on the left side. The hitter has more time to approach since the setter is further away.

Coaches or other players (C1 and C2) start the rally by tossing the ball to the setter (S1 or S2), who sets to the right side hitter (H1 or H2).

A setter, hitter and 1-2 players for the coverage is needed on both sides. In the picture there is one defensive player on each side (D1 and D2). D1 and D2 keep covering the ball up, which is hit to the block by H1 and H2. 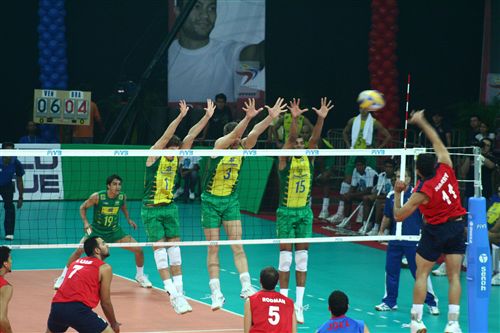 The coach could use some blocking equipment to block the hitter. That forces the attacker to hit the ball to the block, which supposed to be done in this drill.

Or alternatively the coach could put 2-3 players higher on the stand to block the hitter. In the picture there are two blockers on the both sides of the net on the stand (B1, B2 and B3, B4). 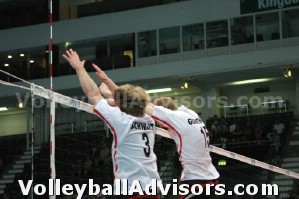 Blockers on the stand do not jump, they just reach and penetrate over the net after the ball is released from the setter.

We prefer the real block, instead of blocking equipment, if there are enough players to make it happen. Their job is to form a steady block to direct the ball straight down to the players on the coverage.

The next progression below is more game-like.  Run this first stage, if you want to test your players ball control skills - and want them to run a fun game while working on communication and teamwork.


How to Ease Up the Drill?

In case this drill is not running smoothly, the coach could make it easier i.e. by stopping the rally and feeding the new ball for the setter after the ball is covered. 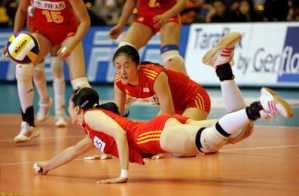 The drill may not be suitable for inexperienced players, since it requires a great ball control and good communication between the players.

No Jumping on the Block

Suggestion: DO NOT allow players to jump when blocking, since the block is not stopping the ball often enough. It will mess up the purpose of this drill, which is to practice covering on every single attack.

Don’t let the hitter get too exhausted, 5-8 swings combined with approaches are enough to get him/her tired. The hitter should be changed often.

This drill is easier for the hitter when running it on the left side.


Give time - Cover the ball high 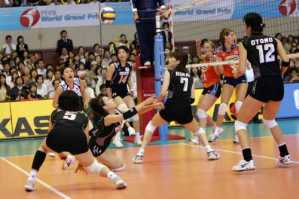 It may get really "crowded" on the right side under the block after the coverage ball is passed up.

How to avoid it?

The players on the coverage needs to pass the ball high enough, maybe a little bit off the net and away from the regular setting position.

If the drill is executed on the left side, or by the setter dishing sets both left and right side hitter, it makes the drill less "crowded". 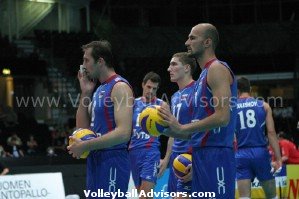 As in any other volleyball drill, try to activate all the players by organizing the same drill on the both sides of the net.

If the drills is run on the both court sides, there will not be too much room since the setter is located next to the blockers on the stand, but it will work out fine with a little adjustments. Whenever possible use more than one court.


Max the Reps by Small Groups

To maximize the repetitions of the players, you should have only max 3-4 players (setter, hitter, max 1-2 players to cover) in each group.


The hitter on the left side.

Important! If running this drill on the left side on the both sides of the net, the ball needs to be covered off the net - since blockers from the other side are on the setter's spot. 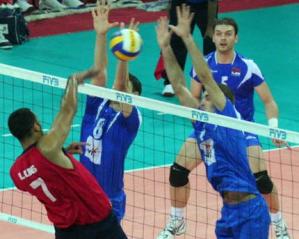 Run the drill on the right side when the hitter swings from the back row.

If you want to run this drill more game-like, you should have the setter delivering the ball either to the left or right side.

The drawback is; it takes the whole court. Also the long distances between the players require even more ball control.


This variation could be a little bit harder than the first one. 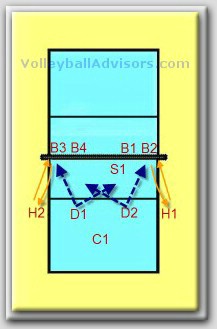 In this variation the setter has an opportunity to set the ball either side (outside hitter or right side hitter).

The coach needs more blockers on the stands. Two blockers are needed on both sides (B1, B2 and B3, B4).

If the players are skilled enough, the coach could use three blockers and perform the drill without stands. Blockers read the setter and set up two or three man block in front of the spiker.

In the picture there are two players (D1 and D2) to cover the hitters on the same side.  There could possibly be even one more player to cover (C1).

C1 feeds the ball for the setter.  Or if the player's skills allow, C1, D1 and D2 could be passing the serve to the setter - before moving to cover the ball.

Moreover, also defensive players could be put to the other side of the court. Then hitters H1 and H2 could be practicing scoring the ball or to play it back to the own side from the block - just like in the match.


Check Fun Volleyball Drills section for the information how these volleyball practice drills can be used to build a teamwork and unity.

From Volleyball Practice Drills to www.VolleyballAdvisors.com