Most volleyball teams pepper in practice.

Let’s think about it for a second. Is it teaching players any skills which are needed in the match?

OK, peppering is a reasonable way to warm up for example in the match where the space and time are usually very limited. 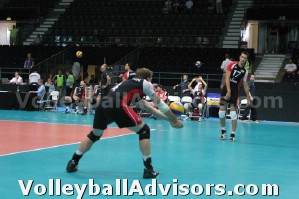 Most volleyball teams pepper for warm ups
before the match.

In practice some coaches have stopped doing it – because it really doesn’t teach the passing, setting and spiking skills what you need in the game. It just teaches you to pepper.

That’s what we did – we stopped peppering in practice. It was the best solution ever.


How we can do volleyball peppering better?

Let’s see how we can do peppering better...

Divide the volleyball court half. 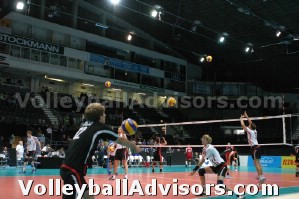 Traditional 1 on 1 peppering - is there a better way?

Form 2 or 3 player teams in the same side of the net.

Teams pass-set-hit the ball to the other side of the net. We prefer to rotate players after each contact, so they all learn to pass, set and spike.


Make sure players focus on the ball control and keeping the really going. 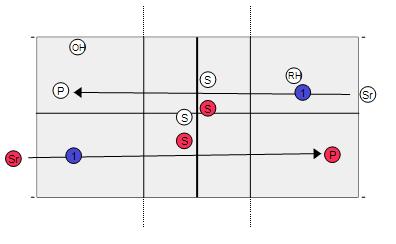 (1) Servers serve to the serve receivers.

Red Teams 2 on 2 on the other half (lower one in the picture).

(1) Servers serve (or toss) the ball over the net to the passer on the other side.


(2) Serve Receivers pass the ball to the setter. 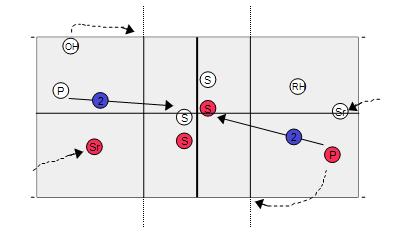 When the opponent's setter receives the ball, make sure both right back defenders on position 1 (RH in the white) or (Sr in the red)  play in their actual defensive position - towards the middle of the court to dig the (imaginery) setter's dump or quick attack.

Outside hitters (OH in white and P in red) start moving to the position from which they start the approach when the setter releases the ball.

(3) Setters release the ball to the outside hitter. 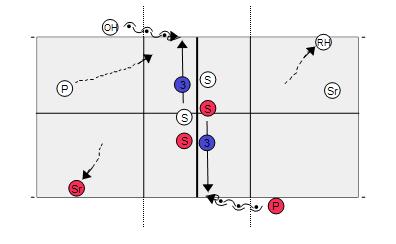 (3) Setters set to the outside hitters.

Outside hitters start their approach.

Right back defenders on position 1 (RH in white and Sr in red) move to defend the line.

P in the white team who plays on the left back position moves closer to cover the attack of OH.


(4) Outside hitters spike the ball to the line defenders. 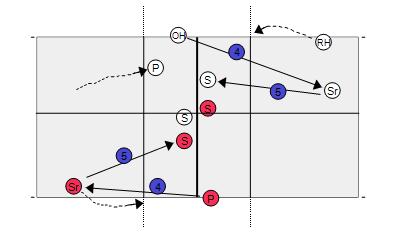 (4) Outside hitters spike to defenders who dig to the setters.
And the rally goes on.

Line defenders on the righ back position have moved to the appropriate positions to dig the ball up.

(If beginning players find it difficult to place the ball to the line, defender could move towards the middle of the court - to keep the rally going longer.)


(5) Defenders dig the ball to the setter.

Right side hitters (Sr in the red and RH in the white) start moving to the position to start their approach when the setter releases the ball.

Remember to keep the drill as game-like as possible.

Require players to set front row set next to antennae on both sides – which means the other team is hitting outside and the other one right side.

Push hitters to do good approach after the pass – and focus on timing on each set.

You may also want your setter to run in (from position 1) when serve receiving or defending – if you don’t have the other team using the other half of the court.

One way to keep rallies longer is to make hitters spike behind 10 feet (3 meter) line.

If you start the practice with this drill, you may want to have players set or bump the ball over the net with the third contact – until players are warm enough to spike.

Setting the ball over with the third contact is a recommended way to do this peppering drill, if the players are not able to control and aim their spikes.

If players cannot spike the ball over you could require a jump set or tip with the third contact.

Take a look at similar drills at.... LINK coming up

From Youth Volleyball Drills Back to Drills