Volleyball Skills: Digging - How to Learn Rolls and Pancakes

Explore volleyball digging skills... how to learn to dig, dive and roll?


Volleyball Skills in Digging -
Rolling: How to roll when the ball on the side?

Rolling over the shoulder 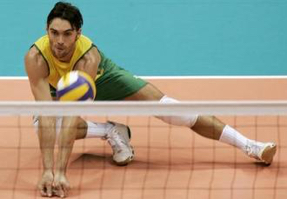 The player performs a rolling dig when the ball falls extremely low.

The player steps out and reaches towards the low ball to the side the ball is falling.

The player reaches out to the position in which other leg is bent and other is extended out to side.

After ball contact the player leans and turns backwards – and rolls over her shoulder back to the standing position.

How to Practice Rolling over the Shoulder? 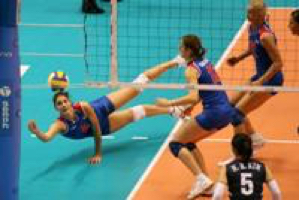 When Practicing over the should roll, first just turn on your back

In some situations the player is not able to complete a full roll and should stop "on the back"-position.

Therefore when practicing the roll, it is appropriate to progress a little by little - and practice leaning and turning on the back first before progressing into a complete roll. 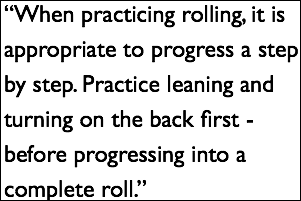 Volleyball Skills in Digging: Rolling -
How to roll when the ball is in front?

Similar to the previous one, the difference being the ball is in front of the player. 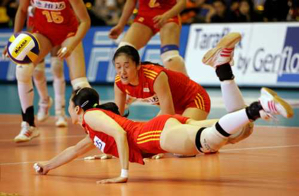 The player takes a long step forward and goes to a low position by bending the knee.

Rolling Sideways - "Keep Other Leg Bent All the Way Through"

After playing the ball, the player leans and turns on the back - important is to keep this bent knee bent through this roll.

This allows the player to get up quickly to the defensive position in the end of the roll. 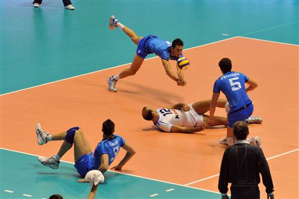 Arm position on the side roll: if the player steps forward with the right leg and the right leg is bent, she needs to keep her left arm fully extended - NOT pointing towards ceiling, but it will be the extension of the body - when rolling sideways.

The left arms needs to be "as the full extension" since you can't leave it under your body because you are rolling over the left side.

And naturally it works as the mirror image when stepping out with the other leg. Test it - and you'll understand why the leg and arm position are important - those help you to roll smoothly. 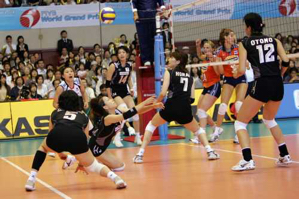 The volleyball player plays the ball with one hand (or both hands) while diving.

Diving is used for example in the situation, in which the block slows down and redirects the ball - or the offensive player tips the ball - to the free spot on the court.

Volleyball Diving - How to Dive?

The player takes a couple of quick steps and dives towards the ball though the air.

When the player is at the horizontal position in the air, she plays the ball with one hand with the upper part of the hand (or alternatively with both hands by forearm pass).

After ball contact, the player lands on the ground by absorbing the landing with both hands – following by chest. 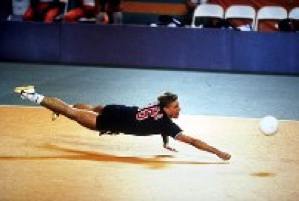 Pancake is similar than the previous dive, but this time the player dives the ball by keeping one arm straightened out.

Since the player suppose to land with other arm straight up front, the player needs to start the dive from the lower position.

Ball rebounds from the upper part of the hand (back hand), when the hand is placed flat on the court.

answers.yahoo.com - Pancake tips from other players