Do you ever feel you are running the same practices over and over again – and the players maybe getting tired of those?

How about letting them play? Wouldn’t that be fun?

After basic skills have been introduced and the players skills allow the coach should starting running various games in practice.

Many other sports, for example soccer (football for non-us people) or basketball have been successfully using one-on-one, two-on-two, or three-on-three person games very effectively.

There have been several superstars in both of those sports who have said they gained their skills by playing 1-on-1 basketball or indoor soccer (futsal for non-us people).

What kind of 1-on-1 games we could play in volleyball?


Volleyball Drills for Beginners - How to improve volleyball passing skills?

Form one player teams to maximize the ball contacts.

Practice bumping by allowing only one contact per team, which makes the game a fast tennis-like game, which teaches footwork very effectively.

The rallies need to be long, so players are able to get many reps in the short period of time.

Use small court size.  The court size depends on how experienced the players are.

Variation 1 - How to Improve Volleyball Footwork? 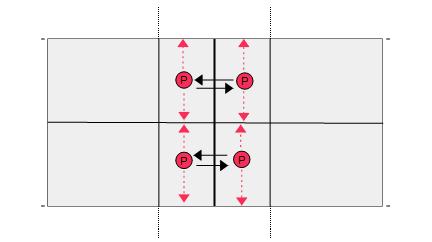 Require players to use shuffling – to make multiple short shuffle steps in movement – instead of just taking one big leap and reaching to the ball.

This is helps them to learn quick shuffling footwork.

Other option is to do it shuffling drills without the ball, but it is much more fun to practice footwork while playing :)

Variation 2 - How to Extend Your Volleyball Passing Range?

Make the court bigger. You could make it all the way up to half court -  maybe leaving inside 10 feet line (3 meter line) off limits.  In this game players learn to contact ball high – not just in optimal position in front of the hips. 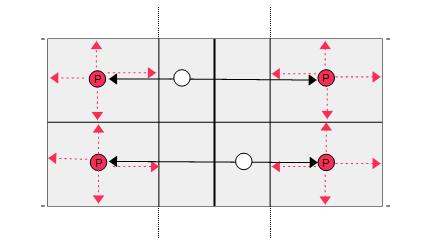 The coach should pay attention to passing techniques and push players to get “behind the ball” when contacting it.

However, this game - especially when making the court longer - teaches players to contact the ball “high on the right side and left side of the player”.

Those are commonly used techniques in the match, in addition to the norm of getting “behind the ball” where you pass the ball in front of the hips.

Other Volleyball Drills for Beginners - How to practice volleyball setting skills?

Run the same games than above with finger setting to improve setting or overhead serve receive skills.

So, you play 1 on 1 and set the ball over with one contact only.

When playing on the smaller 10X15 court focus on the quick footwork, shuffling.  Do not allow players to take big leaps.


Variation 2: How to Improve Setting Volleyball To Long Distance?


Use half court. Make front row off limits. Players set the ball with one contact to the back court.

You may want to make this 15X20 court a bit smaller, if the players do not have enough power to set all the way to the back.

Use this half court with front row offlimits for the rest of the games.
Certainly you can adjust the  court smaller to keep the rallies long -
or bigger to make it more challenging.

Use the half court with front row offlimits (20X15 on the right) in the following volleyball drills for beginners.


The goal is the ball flies over the net for a long time. The coach needs to adjust the court size according the player's skill level.

Example 3 - Two Contacts, Pass to Yourself - Set Over

Allow 2 contacts before hitting the ball over.

This is an excellent opportunity to teach setters and other players "a run through step" when setting to long distance.  This stepping forward happens almost automatically when they really have to push the ball to the back court.  (This is one of the reasons to make the front row offlimits).

Example 4: Two Contacts, Set to Yourself - Bump Over

You could also change it the other way around. Players set to themselves and then bump the ball over.

Volleyball Drills for Beginners and Spiking -
How to Spike the Volleyball? How to Learn to Pass a Top Spin Serve?

Example 5: 2 Contacts, Pass/Set to Yourself - Spike Over

Players take the first contact either by setting or bumping - and you let them spike the ball over feet on the ground.

Allow players to do three contacts.  Pass-Set-Spike. When players spike feet on the ground, then the rallies will be much longer.


How to Learn Tomahawk or Knuckles in Volleyball?

You could also give players special rules, which they have to follow.

For example you could require players to do some "emergency hits" which usually are not practiced that much.


Example 7: How to Learn Some Emergency Hits in Volleyball?

Enforce different rules, i.e.
1) the first contact need to be made by one-handed bump serve receive, or
2) the player needs to put the ball over by knuckles or tomahawk.

The games you can make up are unlimited.

Tips for these Volleyball Drills for Beginners

Use two-player teams - if you only have only one volleyball court in use.

You could form two-player teams, if you have many people in the team and only one court.

You could also have extra players waiting their turn to sub in. You could sub a player in after each rally, or when a team loses a rally.

These drills are extremely tough since players have to move fast and the rallies are long. Players are more than happy to rest after a long rally.

If the players are very skilled and are able to move fast, you should make the court bigger, 15X30 (the half court), even for one-player teams.

Volleyball Drills for Beginners to Drills

Volleyball Drills for Beginners to www.VolleyballAdvisors.com