Explore tips for volleyball digging drills.  How to learn to dig?


Volleyball digging as all other volleyball skills should be practiced in the "game-like" scenario.

... But Basic Defensive Techniques Needs to Be Introduced First

Before defending attacks on the court in the "game-like" situation, players must have been introduced to few different volleyball digging techniques.


Learning Digging Techniques One by One

To help players to understand the differences, it is very important to present different defensive techniques to beginning volleyball players a step by step – as shown in the other “volleyball digging" pages.

How to Organize Defensive Drill?

To organize the volleyball digging drills efficiently on the net, it is important to have at least two spikers to swing the ball for the defenders. It gives players more repetitions and minimizes waiting on the line.  (Look at the picture below.)

Often it is not possible since teams may not have assistant coaches - or the younger players are not able to swing a targeted ball to the defender.

Below there is a typical set up we use in the practice.

For example in the picture below we placed two spikers into the drill, since we try to avoid having several players waiting in line for their turn.

This drill is made for 8-11 players – if you have more or less players, check down below how to adjust it. 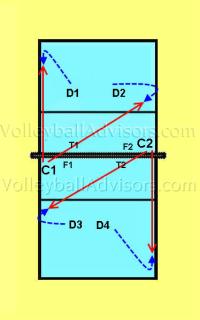 T1, T2 = Targets who put the ball into the basket between the target and feeder.

F1, F2 > Feeders who feed the ball to the coach to maximize the tempo of hitting


Tasks in Our Volleyball Digging Drills

The Coach (or player) on position C1 or C2 stands on the box and swings the ball over the net to the defender on the line and angle, one after another.

If the coach or players are skilled enough, it is the most beneficial to do this drill without the stand - and use hitters who swing from the setter's set. It teaches defensive players to read the set and the hitter. However, the setters and hitters need to be very skilled to be able to swing accurate balls for the defenders. Also if using setters, hitters and possibly ball feeders for the setter it is best if sides are taking turns on hitting - each side hitting one ball at the time.

T1 is the target for defenders D1 and D2.

T2 is the target for defenders D3 and D4.

Targets catch the balls and place into the ball basket between the target and the feeder. If using setters and approaching hitters, the feeder is placed somewhere on the court to feed the ball to the setter.

If the hitter is placed on the stand, it is important to have the ball feeder and target to feed the balls to C1 and C2. Then they are able to keep up a fast tempo – and players will get more repetitions done.

How to use difference variations of this drills?

If you use only 1 spiker and other half of the court, you are able to run it with four players.

If you have 12 players in the team you could add the third spiker and use second court, if available.

If you have 16 players in the team you could add the third and fourth spiker and use two full courts to run this defensive drill.

If there are extra players left they can be shagging the misshit balls around the gym. Or you could add an extra defender into each defensive position to dig the ball and players take turns when playing the defense.

Now we have organized structure for volleyball digging drills. Next..

As mentioned before, techniques should be taught a piece by piece - by repeating specific technique one after another. In volleyball digging there are several slightly different techniques – you get best results when teaching those skills one at a time.

(When practicing the following techniques one at the time, it is recommended to have an accurate hitter on the stand to swing the attacks. Most likely that part can't be done with real hitter who swings from the setter's set. After techniques have been introduced, the coach should run the drill more game-like: the coach should use a setter and approaching hitter in the drill.)

For example when running the drill above players should be..

Middle Attack:
Also similar drills can be done when learning to defend the middle attacker or alternatively 10 feet attack on the position 6. (It is better to practice defending middle offense on one court side only.)

Middle Back Defense:
The coach could also add a middle back player to play defense.

Adding Blockers:
When progressing even further, you could add one/two/three blockers into the mix and learning how defensive position changes when you have one vs. two vs. three blockers.

Adding Setter and Counter Attack:
When digging balls becomes easy coach can add setter and counter attack after the defense.

And the block for the counter attack..