Read more about Dave Cross, an expert in sports psychology who contributes his special volleyball knowledge in the website.

The Co-author of the Nationally Acclaimed Book, VOLLEYBALL CYBERNETICS and National Director of "Yes, I Can!" Volleyball. 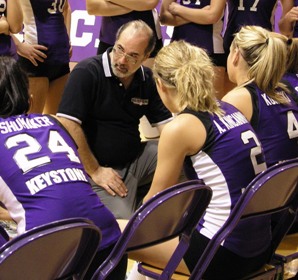 Dave is a founding member of the "Yes, I Can!" Volleyball Camp Program which began in 1986, and has conducted camps and clinics in over thirty states nationwide.

The Head Coach at Keystone H.S. in LaGrange, Ohio for 22 years, Dave retired after the 2007 season. He has won numerous Coach of the Year Awards, including a Special Mention State of Ohio Honor in 1998.

You can view more articles and learn more about Yes I Can Volleyball here:
http://www.yesicanvolleyball.com